Marble Bar is a town and rock formation in the Pilbara region of north-western Western Australia. It is well known for its extremely hot weather.

Founded in 1893, Marble Bar has earned a reputation as Australia’s hottest town, owing to the consistently high temperatures experienced during the summer months when the mercury climbs over 38 degrees for days on end.

Originally the rock formation was thought to be marble hence the name but was later proven to be jasper.

In 1891 the town boasted a population in excess of 5,000 as it experienced a rush on the goldfields.

By 1895 the town had its Government offices built; these are now National Trust buildings. Cut from local stone, the buildings still stand today.

Possibly the most famous building in the town is the Ironclad hotel built in the 1890s, constructed of corrugated Iron, and given the name by American miners who were reminded of the Ironclad ships from the United States. In 2006, the Ironclad hotel was listed on the Western Australian register of heritage places.

Several large gold nuggets were discovered as a result of the goldrush. The 333 ounce Little Hero nugget, the 413 ounce Bobby Dazzler and the 332 ounce General Gordon nugget were all found in the goldfields around the town.

During World War II, United States Army Air Forces and Royal Australian Air Force heavy bombers were based 25 kilometres (16 mi) away as the crow flies at Corunna Downs Airfield. Allied airmen from the base attacked Japanese forces far away as Borneo.

It had a railway connecting with Port Hedland up until the early 1950s, which can be seen as a narrow gauge precursor to the network

The original explorers thought the rock formations were Marble hence the name but the rocks turned out to be jasper. 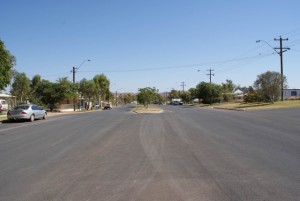