The Government Buildings of Marble Bar have been described in the Heritage Council of WA report as being situated on a triangle of land above Sandy Creek. “It is a very handsome, unified and harmonious collection of government offices. Roofed with corrugated iron, it is constructed in local stone which blends with the countryside, and is decorated with stucco window dressings and brick quoins painted white.” The complex consists of four single storey and four double storey blocks. They are further described as “simple functional buildings that are nevertheless well-proportioned with pleasant massing”. The original plans included a clock tower, Today the Marble Bar Government buildings are screened from the street by closely planted gum trees that provide shade but also block the architectural streetscape value that the buildings could provide.

They have been classified both by the National Trust and the Australian Heritage Commission. They have also been Interim Listed on the State Heritage Register. Historic, aesthetic and social aspects of the buildings are valued by the local community and many visitors to the district. They have unity of setting and townscape and streetscape value. They are a rare and outstanding example of government buildings constructed in the 1890s in a remote part of Western Australia.

George Temple-Poole, famous WA architect of many public buildings, had a strong influence on the design of the Government offices. These included offices for the Mining Warden and the Mining Registrar, a Court House, Police Station and Quarters and the Post and Telegraph Office. Contract drawings were signed on 31st October 1894 with the successful contractor being Charles Darley of Perth. The contract price was £7,949 1 Is 2d and the date for completion was given as 27th August 1895.
A local critic described the construction of the Government Buildings by saying:
“When this work is completed, Marble Bar may hug to its bosom this White Elephant; this gigantic emblem of official stupidity and extravagance which will remain long after we are in our graves and forgotten; to mark at least one epoch in the history of Marble Bar.” (p.219 To The Bar and Beyond.)
However, despite such criticism, the Post Office and government buildings went on to provide solid service to Marble Bar residents. Soon after their opening in 1896 the Post Office and Telegraph Office became a repeater station and the Post Office was regarded as the departure point for coaches. Mining Registrars came and left, many with great rapidity. Between 1896-1917 there were approximately 11 mining registrars. Severe cyclones in 1925 and 1930 caused damage to the Government buildings which saw the removal of the once substantial clock tower.
For many years the buildings were well occupied and today they are still in use by the Mining Registrar, the Magistrates Court, Museum and houses the oldest operational Police station in WA. Marble Bar is the official centre of the rich Pilbara Goldfield. 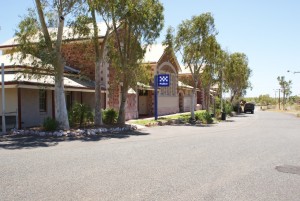